I went to the Scala last night to see The Accused, Thorr’s Hammer and Corrupted.

The Accused were exactly what you’d expect. Which is good of course, but nothing suprising. Their new album is exactly like their old stuff; again good as you know what you’re getting but it’s more of the same really, eh? Like Motorhead – I fucking love Motorhead but everynow and then I feel like I could be listening to pretty much any of their albums so why do I keep buying the new ones? And why do they keep charging so much for the tickets? 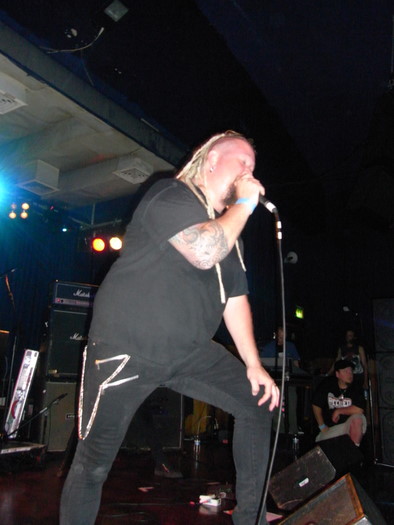 Anyway….I’ve never seen Thorr’s Hammer before and they were awesome. Featuring Stephen O Malley and Greg from Sunn 0))) and with ace vocalist Runhild, they are proper good doom. My friend Redg summed up what is truly amazing about Runhild:

“Shes like a girl you see down at ‘All Bar One’, really blonde, sunbed tan, handbag etc necking baileys irish cream and then out come the voice and she sounds like a disturbed Gorilla.. So amazing..” She must have been barely able to speak after the show. Insane.

I was a bit disappointed with Corrupted. They had some great bits but  took too long to build in my opinion and lost my attention. I’d be standing there wondering whether to go for a smoke and thinking ‘I can’t go now, the big ass doomy bit must be about to kick in’  but then I’d go to the bathroom, have a fag and buy a pint and when I got back nothing would have happened at all. I think they only played one song. They weren’t doomy enough either. Hmm. Great on record though.