More changes to the steed

I got really sick over New Year at Ian’s house. Maybe the terrible sound of my over zealous karaoke turned everyone else’s stomach too – the next day I could hear Ian running back and forth from the bathroom throwing his guts up. I went to bed at 5am on New Years eve and I couldn’t get up again until 36 hours later. Maybe it was something I ate? Yeah, right!

So I spent a lot of time feeling like crap and then came back to work. Bah!

Anyway, yesterday we went to the regular Tuesday tricks night on the roof of the Spitalfields carpark last night and it was well nippy! Fuck off Winter and roll on Summer! Anyway, I changed my set up a bit and had my first ride with my new Thomson stem and these Charge Nozzle forks. 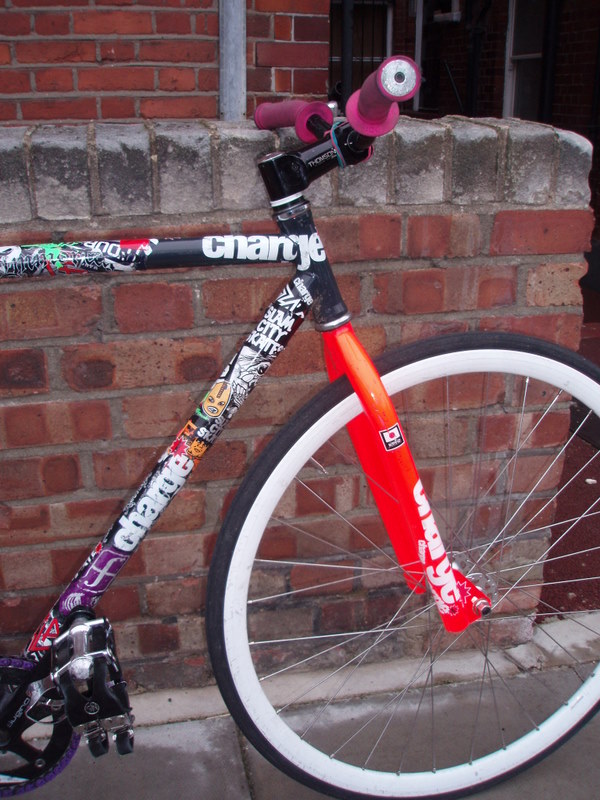 The stem feels great; really stiff and longer than my other one. I put the new forks on as the standard Plug ones were taking too much of a beating… There’s no way these new ones are gonna bend but the downside is they are really heavy. They’ve changed my riding position for the better though; they’re a little longer so my bars are higher, plus the angle is slightly  different. Now that this bike has become such a beast, I think I’m going build up my slinky Japanese track frame so that I have the option of riding that when I fancy a change. I just need to get back all the bits I’ve lent out, borrowed off it or left at my friend’s places.